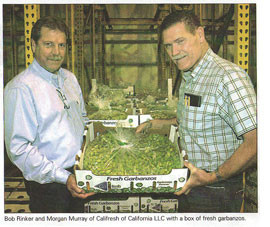 Califresh of California LLC in Sanger, CA which was formed in 2002 specifically to bring fresh green garbanzos to market, began by offering the product six months out of the year but has since expanded production to several growing areas, thereby making the product available year round.

Garbanzos are best known to most U.S. residents as a canned item usually called  "garbanzo beans" found frequently in salad bars. They are also widely available in dried form. But fresh green garbanzos are a popular snack in Mexico and particularly in Central Mexico, according to Morgan Murray, managing member of Califresh.

Garbanzos, which are actually a pea and not a bean, are also known as chickpeas and are "the most widely consumed legume in the world," most notably in India and he Middle East, said Mr. Murray. "They are highly prized for their snack-like quality, nutritional value and diversity in ethnic dishes. Picked green as a fresh produce item, they have a firm crisp texture with a slightly sweet to nutty flavor. They are usually deep to pale green color and brighten up when cooked, adding color to the menu. They also taste great uncooked in salads when removed from the shell or pod."

Mr. Murray has been involved with garbanzo production since 1981. He spent 15 years with Klein Bros. and 10 years with ConAgra Foods, both of which were in the dried garbanzo business. "I left in 2002 to form this company," he said.

ConAgra, which has "since exited the [dried garbanzo] business in California," at one time had five garbanzo facilities in the state. From 1981 to 1999, California garbanzo acreage grew from "just a few acres" to 26,000 acres, Mr. Murray said.

For years we had seen Mexican roadside vendors ... pull plants in the fields" and peddle the fresh garbanzos on-the-vine along the roadsides in Southern California. "We had quite a bit of theft in the early years, and subsequent to that, there was a lot being purchased from farmers" and sold at roadside stands, he said.

Fresh garbanzos on-the-vine are "still a popular item," Mr. Murray continued. "There are a lot of people who want to buy them on-the-vine," primarily people from Mexico who were already familiar with the product.

Because of the demand we saw in Southern California, we felt we could pack the product for the retail grocer" and satisfy some of the existing demand for fresh garbanzos among Hispanic consumers. Rather than market them on the vine, however, Califresh pulls the pods off the plants and cleans and grades them before packing and shipping, making the in-shell product much easier to use, he said.

The traditional consumers of fresh garbanzos have always perceived the product as a seasonal item available locally during a short window. Local crops were picked and sold into local markets, he said.

Because of the familiarity of Mexican immigrants in the United States with fresh garbanzos, they "know the product and they look for it," he said. "We have consumers here who understand the product."

But by producing in different areas, Califresh has been able to make the product available initially for six months, eventually extending that to 12 months a year. "We have managed to accomplish that" by growing the garbanzos in different areas of Mexico and California, said Mr. Rinker.

The crops are planted "sequentially, so you have fresh product that is being harvested thoughout the year," Mr. Murray added.

There is still some seasonality to the crop. "There are times when it is more abundant than other times," he said. At certain times of the year, "we have to plant in certain microclimates" in order to achieve good quality and good yields.

Because of the familiarity of Hispanic consumers with fresh garbanzos, the Califresh marketing focus so far has been on regions of the country that have large Hispanic populations, particularly Southern California and the southwestern United States. The products are now available in many independent ethnic supermarkets as well as in several major retail chains. They were recently introduced to "selected Wal-Mart supercenters in California, Arizona and New Mexico," according to a Califresh press release.

The company offers bilingual merchandising assistance to retailers and recommends displaying the fresh in-shell garbanzos near the tomatillos and chilis to maximize movement.

The IQF peas are sorted by size and color before freezing, "so we have a uniform pack," said Mr. Murray.