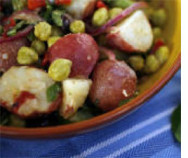 Out cruising for chickpeas
Sure, this town's crawling with 'em canned or dried, but get a load of these babies when they're fresh

Over the years, I've eaten chickpeas every which way - puréed for hummus or soup, whole with couscous or pasta, in a box, with a fox. I've opened cans when I'm harried and soaked the dried legumes when I've planned ahead. But until last month I'd never heard of fresh chickpeas - never even imagined their existence.

If there is a dried bean, logically there is a fresh one. Still, who knew? Even in Italy, where cooks routinely use chickpeas, people think the beans are "born brown and born dry," as British food writer Patience Gray wrote 20 years ago. Little has changed since then - certainly not in the United States, where fresh chickpeas remain almost unheard of.

Perhaps their time has come.

Califresh, a 5-year-old California company, has begun marketing fresh chickpeas in the United States outside the ethnic communities that traditionally cook with them.

"We saw a niche and took advantage," Bob Rinker of Califresh said. We first spoke when he was in the Rio Grande Valley negotiating with Wal-Mart to carry fresh beans, also known as garbanzos, in stores across Texas. The deal went through, he proudly said two weeks later, confirming that "selected Supercenters throughout the state" now carry them.

A small but growing number of gee-whiz mentions in the culinary blogosphere also indicates the beans are ready for prime time. Then there's the edamame paradigm: If the soybean - once the butt of jokes - could sweep America, what's to stop the chickpea?

Delicate and nutty, fresh chickpeas persuasively make their own case. They taste like an artichoke heart, with suggestions of green bean, English pea and lemon - the soul of spring.

The flavor hints at the canned counterpart as cucumbers allude to pickles. Unlike dried, the fresh beans are a pretty shade of apple green. They grow in pods roughly the size of a peanut, one, two or rarely three to a pod. Shelled, they look like "a miniature green brain," 101 Cookbooks blogger Heidi Swanson has written.

I stumbled onto them while grocery shopping at a Sellers Brothers Market in Spring Branch. I was so pleased with my small bagful that the next day I went in search of more. When I spied them at a Fiesta Mart in Montrose, I cleaned the store out. Since then I've spotted them at the Airline farmers market, too. Prices ranged from $1.39 to $3 a pound. Peak season is February-June. The beans mostly come from Mexico then. Califresh has extended the season at other times with a California crop.

Experimenting with fresh garbanzos has been a modest but not inconsiderable thrill. You'll find scant guidance in cookbooks. But relax, this isn't rocket science. First, I made fresh-chickpea hummus the color of guacamole. It tasted lighter and brighter than any hummus I'd ever encountered.

Before returning to the kitchen, I asked some experienced cooks for advice. Fresh garbanzos may be new to Americans, but they're old hat in Mexico, the Middle East and India.

"Pop it open from the shell and just eat," suggested Moses Abayan, native of Lebanon and a manager at Phoenicia Specialty Foods. "I am sure you may be able to cook them, too, but growing up I used to eat (them) like that." Phoenicia sells the fresh beans seasonally.

Indians also snack on them out of hand, Houston cookbook author Suneeta Vaswani said. "We make a salad kind of thing, too. Shell them and toss with fresh lemon and lime juice and chaat masala (a spice mix) to zip it up a bit, and of course you can add some chopped cilantro. It is yummy."

Mexicans eat fresh garbanzos during Lent as a meat substitute. Monica Ramirez, who sells them at Martinez's Produce at the Airline farmers market, had a wonderful idea, borrowed from Mexican street vendors. Grill them with salt, cayenne and lemon.

I added chili powder and a smidge of olive oil and used lime instead of lemon. The roasted fresh garbanzos were addictive.

A Los Angeles Times article noted that chef Robert Gadsby added fresh garbanzos to soup, risotto and a tuna sashimi plate at Noé in L.A. Now that he's at Soma in Houston, does Gadsby use them here? Yep. In season, they dot the menu like punctuation points, but diners aren't likely to know; the menu simply says "garbanzos."

At Soma, Gadsby pickles the fresh beans; adds them to lamb-shank curry with potatoes and carrots; purées them with butternut squash, cumin and coconut milk for a soup he garnishes with fresh garbanzo "croutons"; and mashes them with onions and potatoes to make vegan mayonnaise. "I'm known in the industry for always having some weird or secret ingredient," Gadsby said. "I'm a big fan."

In Chez Panisse Vegetables (HarperCollins, $35), Alice Waters dispenses with fresh garbanzos in two sentences. "During the summer, we sometimes find fresh chickpeas at the markets in San Francisco that cater to ethnic cooks. These can be shelled and cooked in the same way as other fresh shell beans."

With her encouragement, I steamed fresh garbanzos and added them to pasta, soup and stew, with happy results. I tossed them raw into salads and popped them into my mouth for a virtuous yet satisfying snack. Fresh garbanzos are rich in protein, calcium, iron, folate and soluble fiber, according to Califresh. "They are really good for you," Rinker summed up.

Fair warning: Shelling them is slow work. Califresh sells them shelled, although I haven't come across a package in the Houston area. On the plus side, it's a kitchen task that affords a Zen calm. Or you can do it in front of the television, as I did late one evening.

Vaswani suggested enlisting a helper: "A child will be only too happy to do this, provided you reward them well with at least one-third of the peas. Provide for a lot of extras."

Fresh garbanzos taste good. They've got versatility, attractive coloring, a brawny nutritional profile, a name chef or two behind them, and exotic culinary appeal. A star is born?
peggy.grodinsky@chron.com